Copenhagen Attacks Reignite Debate About Safety Of Jews In Europe 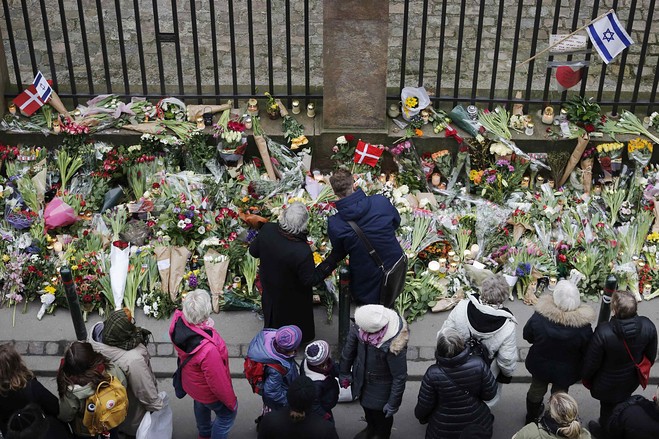 Netanyahu Invites Jews to Seek Refuge in Israel; Others Call for Increased Effort to Fight Terrorists

Denmark’s Jewish community was in shock Sunday after a gunman attacked a Copenhagen synagogue, in a weekend of violence that echoed the deadly events in Paris last month and rekindled a debate over the dangers of being a Jew in Europe.

Police said they shot and killed the gunman, who killed a guard and wounded two policemen at the synagogue a day after attacking a seminar on free speech that featured a Swedish cartoonist who has lampooned Islam. One man, a participant in the conference, was killed and three policemen were wounded in the first assault.

At the synagogue, the gunman killed 37-year-old Dan Uzan, who was guarding the door of a bat mitzvah ceremony in a parish hall. None of the reported 80 guests were injured.

A stream of Danes converged on the synagogue to pay their respects to the victims, laying flowers along a stone-and-iron fence.

“Jews have been murdered again on European soil only because they were Jews,” Israeli Prime Minister Benjamin Netanyahu said Sunday after the Copenhagen attacks. I would like to tell all European Jews and all Jews wherever they are: ‘Israel is the home of every Jew.’”

Mr. Netanyahu, who had made a similar declaration after the Paris attacks, in which four Jews were killed at a kosher store, said his government would launch a $46 million plan to prepare for “mass immigration” from Europe to Israel.

Several Jewish leaders said the call by the Israeli Prime Minister was ill-timed. “Terror is not a reason to move to Israel,” Jair Melchior, Denmark’s chief rabbi, told the Associated Press, adding he was “disappointed” by Mr. Netanyahu’s comment.

Some said authorities need to do more to protect Jewish communities. European Jewish Congress President Moshe Kantor called on European authorities to form a pan-European task force with legal authority and financial resources dedicated to taking the battle to the radical Islamist enclaves, hunting terrorists down before they act.

“The threats against Jews and the inability of governments to defend them are forcing Jews out of Europe,” Mr. Kantor said. “Intelligence-gathering, surveillance and protection must be amassed and shared by all nations and terrorists need to be hunted down before they act. Now is the time for all EU member states to act swiftly and effectively.”

About 8,000 Jews live in Denmark, a nation of 5.7 million, according the European Jewish Congress.