EJC President Said That If The Exodus Of Jews From Europe Continues, “The European Union Will Be Judged A Failure” At First Annual Colloquium On Fundamental Rights In The Eu 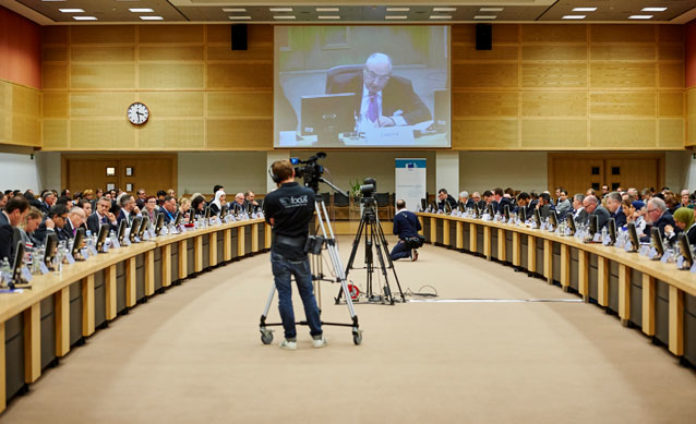 European Jewish Congress (EJC) President Dr. Moshe Kantor sounded the alarm over the significant rise of Antisemitism on the continent at the first Annual Colloquium on fundamental rights in the EU, where he spoke on behalf of European Jewry.

“The issue of refugees is a great test for Europe. However, it is failing a greater test every day in Europe,” Dr. Kantor said. “Earlier in the year, French Prime Minister Manuel Valls said, after the deadly anti-Semitic terrorist murder at the Hyper Cacher market in Paris: ‘If 100,000 Jews leave, France will no longer be France. The French Republic will be judged a failure.’”

“I would like to take this a step further. If hundreds of thousands of Jews leave the European Union, which is becoming a very strong possibility, then it too will be judged a failure. Over the past few years, tens of thousands of Jews have left Europe to seek a safer home elsewhere, and today, one-third of Europe’s nearly 2.5 million Jews are considering emigration. Whole areas of Europe are being emptied of Jews and not enough is being done.”

The Colloquium was hosted by First Vice President for Better Regulation, Interinstitutional Relations, the Rule of Law and the Charter of Fundamental Rights, Frans Timmermans, in cooperation with EU Commissioner for Justice, Consumers and Gender Equality, Věra Jourová.

EU Commission First Vice-President said in his remarks that: “Without the Jewish community, Europe will cease to exist” and “Antisemitism, if left unchallenged will pose a great problem to our society.”

At the Colloquium, the EU’s Fundamental Rights Agency (FRA) released a report of Antisemitic incidents in 2014, which once again demonstrated a substantial rise in hate attacks on Jews across the continent. In France, the number of incidents more than doubled from 423 attacks in 2013 to 851 in 2014.

The report notes that “Antisemitic and intolerant attitudes can lead to behaviour punishable by law, but Antisemitism needs to be countered beyond the criminal justice system perspective. Two-thirds of respondents to FRA’s survey on Jewish people’s experiences and perceptions of Antisemitism consider it to be a problem in their country, and 76 % believe that during the past five years Antisemitism has increased in the country where they live.”

During his address, Dr. Kantor called for the immediate implementation of various steps to combat Antisemitism, including the creation of a special EU Task Force on Antisemitism, with a dedicated full-time Envoy, as they have in the U.S., France and Germany. He also called for the establishment of a clear and officially recognized definition of Antisemitism to be adopted by the EU, as well as new legislative powers to tackle hate, extremism and intolerance.

“Unfortunately, it seems that Jews are also unique in being one of the few victims of racism in Western society where the boundaries of what is considered hate are set by the perpetrators themselves and not the victims, Dr. Kantor said.

“In 2005, the European Union Monitoring Center on Racism and Xenophobia (EUMC) released the ‘Working definition of anti-Semitism’. However, it was never officially adopted and the EU’s Fundamental Rights Agency recently taken the definition from its website, giving an unacceptable victory to those who worked extremely hard against its adoption.”

“The lack of a unified and clear definition means that anti-Semites will continue to act with protection and freedom, knowing that frequently they cannot be prosecuted.”