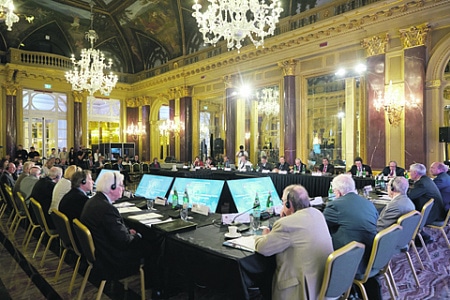 (ROME, June 5, 2019) The International Luxembourg Forum on Preventing Nuclear Catastrophe held a conference in Rome to discuss Arms Control: the Burden of Changes.

Leading experts in nuclear arms reduction, control and non-proliferation from the United States, Russia, France, Sweden, Canada, Brazil, Australia and other countries, addressed the most important and pressing nuclear security issues, including possibility to maintain arms control in the absence of the Intermediate-Range Nuclear Forces Treaty, preserving strategic arms control after 2021, and sustainability of strategic and regional stability. The participants focused on sufficiency of the existing standards and mechanisms to prevent the collapse of the Treaty on the Non-Proliferation of Nuclear Weapons (NPT), new threats, and measures to counteract nuclear terrorism in light of upcoming 2020 NPT Review Conference.

“I believe that the unprecedented intellectual potential that our conference brings together is capable of achieving a breakthrough to prevent a nuclear catastrophe from happening,” President of the Luxembourg Forum Dr. Viatcheslav Kantor said. “Implementing our proposals also pursues the goal of ensuring the success of the 2020 NPT Review Conference.”

The participants assessed positively the results of negotiations on a five-year extension of the existing Strategic Arms Reduction Treaty (START) as it is mutually beneficial for both parties.

“If the treaty is extended, we can hope that within five years the parties will find ways to preserve the principles of strategic stability based on drafting a follow-up START treaty. It would make sense to focus first on drafting a new treaty between the U.S. and Russia and then to examine possibilities for involving China in one form or another,” emphasized Dr. Kantor.

The Luxembourg Forum experts discussed and analyzed several scenarios for the possible consequences of the INF Treaty collapse, from “mild” deployment of non-nuclear cruise missiles only in NATO countries and in Russia, to full-scale deployment of nuclear-armed cruise and ballistic missiles.

“The INF treaty was probably the most significant arms control treaty ever negotiated, in that it eliminated a whole class of missiles, the intermediate range missiles, thereby removing a dangerous threat to all of Europe, including European Russia”, noted the former Secretary of the U.S. Department of Defense and a member of the Luxembourg Forum Supervisory Board William Perry. “And it appears that the Trump administration intends to let New START expire in 2020, rather than extend it, or negotiate a follow on treaty. If that happens, there will be, for the first time in almost fifty years, no agreed limit on nuclear weapons; and there will be no bilateral talks underway on how to limit nuclear dangers. This has become the new normal for arms control treaties, which I call the new abnormal, and it has happened in just two years.”

The conference participants paid special attention to the threat of nuclear terrorism remaining as high as ever despite a high level of international cooperation in this area and a whole range of measures to counteract this threat both at the national and global levels.

“We have studied in depth and discussed on many occasions at our conferences the likely scenarios by which terrorists could acquire and use nuclear materials. We propose establishing a global international system to control movements of radioactive materials using universal hardware and software systems that can detect illicit movements of these materials. In addition, we propose establishing an international coordination center or headquarters in Europe, where representatives, the relevant ministries and intelligence services of the major powers could work together on a permanent basis,” President of Luxembourg Forum said.

Participants of the conference noted that the system of standing contact groups in the relations of the two nuclear superpowers, the United States and Russia, that operated at the highest and other levels and included ministers, scientists, military experts and political analysts, no longer exists, and that the consequences of this are unpredictable. The revival of this system is a top priority.

As the outcome of the conference, the Luxembourg Forum experts prepared the final declaration containing their specific proposals and recommendations to the major international organizations and leaders of major powers to strengthen the nuclear non-proliferation regime and international nuclear security.

The conference in Rome was attended by Dr. Viatcheslav Kantor; Professor at Stanford University, former Secretary of the U.S. Department of Defense William Perry; President of the Pugwash Conferences on Science and World Affairs, former UN High Representative for Disarmament Affairs Sérgio Duarte; President and Chief Operating Officer of the Nuclear Threat Initiative (United States) Joan Rohlfing; Deputy Chairman of the Foreign Affairs Committee of the Council of the Federation of the Federal Assembly of the Russian Federation Vladimir Lukin; leading researcher at the Institute for the US and Canadian Studies, Russian Academy of Sciences, former Chief of Staff – First Deputy Commander-in-Chief, Strategic Missile Forces, Esin Victor; President of the Russian International Affairs Council, former Minister of Foreign Affairs Igor Ivanov; senior research scholar at Princeton University, co-founder of the Global Zero initiative Bruce Blair; Director of James Martin Center for Nonproliferation Studies, Professor at Middlebury Institute of International Studies at Monterey William Potter; Professor at the University of Maryland, member of the Luxembourg Forum Supervisory Board, Academician, Russian Academy of Sciences Roald Sagdeev; Chancellor of the Australian National University, former Australian Minister of Foreign Affairs Gareth Evans; Consulting Advisor for Policy and Outreach at the Office of Executive Secretary, Comprehensive Nuclear-Test-Ban Treaty Organization (CTBTO) Tariq Rauf; Ambassador, member of the Luxembourg Forum Supervisory Board Rolf Ekeus; Senior Adviser at the Center for Strategic and International Studies, Ambassador Linton Brooks; Emeritus Board Member at the Nuclear Threat Initiative Pierre Lellouche; Professor Emeritus at the Department of Political Science, Columbia University, Robert Legvold; Director and Senior Fellow of the Russia and Eurasia Program at the Carnegie Endowment for International Peace Eugene Rumer; Director of the International Security Program; Editor-in-Chief, of the International Security magazine; Member of the Board of the Belfer Center for Science and International Affairs, John F. Kennedy School of Government, Harvard University Steven Miller; associate fellow at the International Institute for Strategic Studies Mark Fitzpatrick; member of the Asia Pacific Leadership Network, Counsellor to the Nuclear Threat Initiative John Carlson; Executive Director of the Arms Control Association Daryl Kimball; Chairman of the Organizing Committee of the International Luxembourg Forum, principal researcher at the Center for International Security of the Primakov National Research Institute of World Economy and International Relations of the Russian Academy of Science, former Director of the 4th Central Scientific Research Institute, Ministry of Defense of the Russian Federation Vladimir Dvorkin; Deputy Chairman of the Organizing Committee of the International Luxembourg Forum, Head of Section for Military-Political Analysis, Primakov National Research Institute of World Economy and International Relations (IMEMO) Sergey OZNOBISHCHEV.