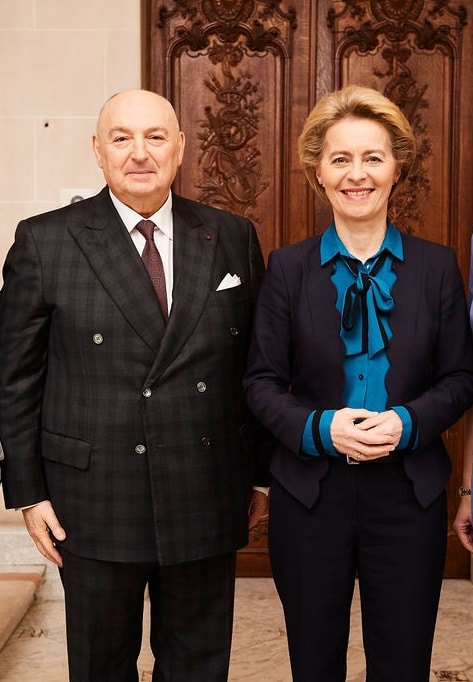 (Brussels, December 11, 2019) – European Jewish Congress (EJC) President Dr. Moshe Kantor warned that antisemitism should no longer be seen as just a Jewish issue because it poses a wider threat to society as a whole, at the event “After Halle: From words to action against antisemitism” held in Brussels, hosted by the European Parliament Working Group on Antisemitism.

“Antisemitism is a symptom of a much more acute problem,” Dr. Kantor said. “When a Jew is assaulted in the street for being Jewish, it is essentially an assault against democratic values, the rule of law and executive power.”

“As the political centre weakens and becomes more fragile, extremist groups who promote intolerance try to gain political power by attacking the foundations of democratic societies. To tolerate the crisis of antisemitism is to normalize extremism. The crisis of antisemitism is a slippery slope to global catastrophe. We need to understand this threat, and we need to deliver this message to the silent majority.”

The event was organised by the European Parliament Working Group on Antisemitism (EP-WGAS), in cooperation with the European Jewish Congress and B’nai B’rith International. The other keynote speaker, alongside Dr. Kantor, was President of the European Commission Dr. Ursula von der Leyen.

“At this pivotal point in history, world leaders need to stand up and act. Words are not enough. A roadmap needs to be drawn up and an agreement on joint action needs to be finalised. It requires the involvement of the leadership to deal with it on all levels – legislation, education, enforcement and punishment. Like in Halle, violent antisemitism is driven by incitement, lies and myths. There should be zero tolerance for antisemitic hate speech and all other forms of hatred. Harsher punishment should be given to those who spread anti-Jewish hatred in words before it turns into violent action.” Dr Kantor added.

At the event, President von der Leyen announced the creation of a new task force to tackle rising antisemitism across Europe, which she said represents “attacks on us all.”

“A rising challenge needs a stronger response from our side,” she said. “Antisemitism is a poison for our community. We will remain vigilant. And more, we will act on all levels, through security means of course, but also in our education systems and in the public debate. Fostering Jewish life is something I have taken seriously,” she added.

“Halle has demonstrated dramatically the urgency need for action,” said Ms. Edtstadler, “it must be self-evident that Jewish people can move freely and feel safe in our society, and this must be our common goal in the spirit of European values ​​and traditions.”

For their part, MEP Juan Fernando Lopez Aguilar insisted on importance of law enforcement and MEP Sergey Lagodinsky raised the issue of addressing antisemitism in education and ensuring that teachers are adequately trained. MEP Nicola Beer insisted that the attack in Halle was an attack on all European society and emphasised the urgent need for joint to stamp out antisemitism.

Dr. Kantor is a strong advocate of a global approach to fighting antisemitism and has initiated an unprecedented event to commemorate International Holocaust Remembrance Day on the 75th anniversary of the liberation of Auschwitz.

On 23 January 2020, the Fifth World Holocaust Forum will take place in Jerusalem, and almost 40 heads of state have confirmed they will participate in this unique event. The event, titled “Remembering the Holocaust, Fighting Antisemitism,” is being organized by the World Holocaust Forum Foundation, also headed by Dr. Kantor, in cooperation with Yad Vashem, under the auspices of the President of the State of Israel, Mr. Reuven “Ruvi” Rivlin.

The President of France Emmanuel Macron, President of Germany Frank-Walter Steinmeier, President of Russia Vladimir Putin and President of Italy Sergio Mattarella are among the leaders who have so far confirmed their attendance of this historic event.

0
(Friday, December 11, 2020) - The European Jewish Congress (EJC) has welcomed and lauded the reestablishment of full ties and warm relations between the...
Read more