The First Ever Global Social Media Campaign to combat Antisemitism is Launched, Titled: “STOP THIS STORY!” 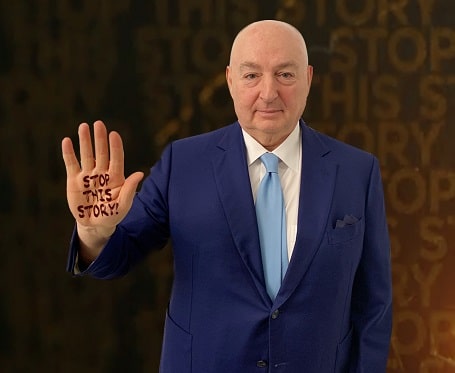 (Tuesday, January 14, 2020) – For the first time ever, a social media campaign was launched today with the aim of generating awareness about the problem of antisemitism, ahead of the Fifth World Holocaust Forum,  where over 45 heads of state and world leaders will gather in Jerusalem to remember the Holocaust and find ways to fight antisemitism.

The ‘Stop This Story!’ Campaign, will be the first global initiative of its kind that will leverage Instagram’s AR (Augmented Reality) effects to drive a global movement.

Already, Israeli President Reuven Rivlin, supermodel Bar Refaeli, actress Vanessa Kirby (from ‘The Crown’), former NBA player Omri Casspi, and many other international figures, actors, entertainers, and sportsmen and women, have joined the campaign and created their unique images. Many other international stars have been secured to join.

Dr. Moshe Kantor, President of the World Holocaust Forum Foundation and the European Jewish Congress, initiator of the unprecedented international Instagram campaign that calls on the world to act and put an end to the never-ending story of antisemitism, said “Antisemitism, in all its various forms, harms Jews around the world on a daily basis, whether in their homes, streets, schools, universities, synagogues, and online. This phenomenon causes more than 80% of the Jews of Europe to fear for their safety and more than 40% of them to consider leaving their homes and communities,”

“The best way to spread any message today is through social media because social networks and those who use them have the power to make the necessary changes in our societies.” Kantor added. “Instagram users are a significant demographic segment that is growing rapidly, and I have always argued that the best way to fight any form of prejudice is through education and awareness. Creating awareness of the story of antisemitism is the first step necessary to stopping it.”

Instagram’s virtual effects, launched a few months ago, have swept millions of users around the world to tell their story in a more creative way, but now, for the first time, they are becoming a tool for social change as part of this digital campaign.

The campaign recruited some of the world’s leading AR effects’ creators. It has gained the support of international influencers, each of them with millions followers, to create their own creative “Stop This Story!” effect adjusted to the palm of the hand, so anyone can easily and experientially create and share their “Stop This Story!” image on Instagram and join the global movement. (@stopthisstory)

In addition, a time-lapse video project, featuring Dr. Ruth Westheimer, 91, the world-renowned sex therapist, media personality and Holocaust survivor, will be posted on Instagram and other social media platforms in a series of stories. The video highlights the never-ending story of antisemitism, utilizing impressive visual techniques.

Using these technologies, including Time lapse, the endless story of antisemitism, from the 1930s to the year 2020, will show the world that antisemitism did not end with the Holocaust and is gaining steam again to frightening levels.

On 23 January 2020, the Fifth World Holocaust Forum will take place in Jerusalem, and over 45 heads of state have confirmed they will participate in this unique event. The event, titled “Remembering the Holocaust, Fighting Antisemitism,” is being organized by the World Holocaust Forum Foundation in cooperation with Yad Vashem and the President of the State of Israel, Mr. Reuven Rivlin.

The President of France, Emmanuel Macron, President of Germany, Frank-Walter Steinmeier, President of Italy, Sergio Mattarella,  President of Austria, Alexander Van der Bellen, President of Russia, Vladimir Putin and H.R.H Prince Charles, The Prince of Wales, are among the leaders who will participate in this historic event.