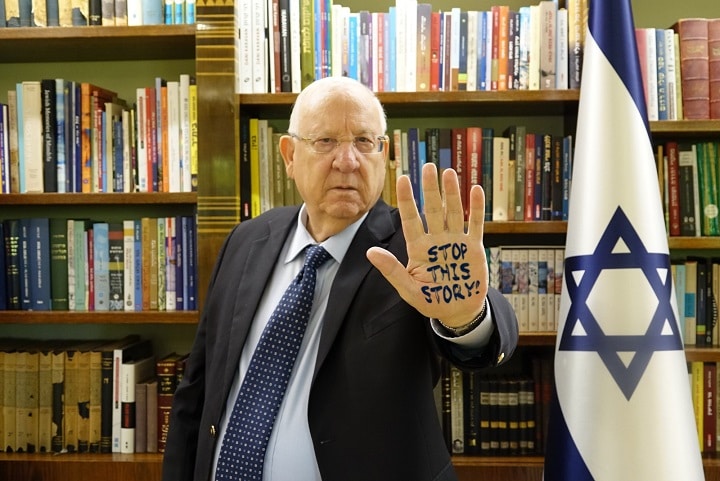 (Friday, January 17, 2020) – Top international stars like Snoop Dogg (35M followers), Ludacris (19.5M followers), Charlie Sheen (5.5M followers), and J. Holiday (3.5M followers), as well as over a hundred other celebrities and public figures, have participated in an Instagram campaign to highlight and combat the rise of antisemitism called ‘Stop This Story!’.

The campaign was launched ahead of the Fifth World Holocaust Forum, where over 45 heads of state and world leaders will gather in Jerusalem on January 23rd to remember the Holocaust and find ways to fight Jew-hatred.

Dr. Moshe Kantor, initiator of the event, as President of the World Holocaust Forum Foundation and the European Jewish Congress, launched the unprecedented international Instagram campaign that calls on the world to act and put an end to the never-ending story of antisemitism.

So far, over five million Instagram users have seen and participated in this unprecedented human rights campaign, which has been shared by influencers across the world, including from India, Iran and the Arab world.

“The success and massive spread of this campaign demonstrates that people are starting to take antisemitism seriously and understand that we need to put an end to hatred against Jews,” Dr. Kantor said. “Spreading awareness is always the first step of any human rights campaign and we hope that another great step will be taken next week with the unprecedented and historic gathering of dozens of heads of state and world leaders in Jerusalem to create a roadmap for ending Antisemitism.”

“Antisemitism needs to be fought at every level and it is vital that we harness, not only the decision-makers and opinion-shapers, but also the public, because one of the great lessons from history is that when the people stand up to hate it can be defeated.”

The ‘Stop This Story!’ Campaign, is the first global initiative of its kind this is leveraging Instagram’s AR (Augmented Reality) effects to drive a global movement. Other prominent figures who have participated in the campaign are Israel’s President Reuven Rivlin, supermodel Bar Refaeli, actress Vanessa Kirby (from The Crown), sex therapist Dr. Ruth Westheimer, Bollywood star Vishal Singh, Iranian rapper Tohi, as well as many other international figures, actors, entertainers, and sportsmen and women, who have joined the campaign and created their unique images.

The campaign recruited some of the world’s leading AR effects’ creators. It has gained the support of international influencers, each of them with millions followers, to create their own creative “Stop This Story!” effect adjusted to the palm of the hand, so anyone can easily and experientially create and share their “Stop This Story!” image on Instagram and join the global movement.

In addition, a time-lapse video project, featuring Dr. Ruth Westheimer, 91, the world-renowned sex therapist, media personality and Holocaust survivor, will be posted on Instagram and other social media platforms in a series of stories. The video highlights the never-ending story of antisemitism, utilizing impressive visual techniques.

Using time lapse, the endless story of antisemitism, from the 1930s to the year 2020, will show the world that antisemitism did not end with the Holocaust and is gaining steam again to frightening levels.

On 23 January 2020, the Fifth World Holocaust Forum will take place in Jerusalem, and over 45 heads of state have confirmed they will participate in this unique event. The event, titled “Remembering the Holocaust, Fighting Antisemitism,” is being organized by the World Holocaust Forum Foundation in cooperation with Yad Vashem, under the auspices of the President of the State of Israel, Reuven “Ruvi” Rivlin.

US Vice President Mike Pence, President of France Emmanuel Macron, President of Germany Frank-Walter Steinmeier, President of Italy Sergio Mattarella, President of Austria Alexander Van der Bellen, President of Russia Vladimir Putin as well as the Kings of Spain, Holland and Belgium and H.R.H Prince Charles, The Prince of Wales, are among the leaders who will participate in this historic event.