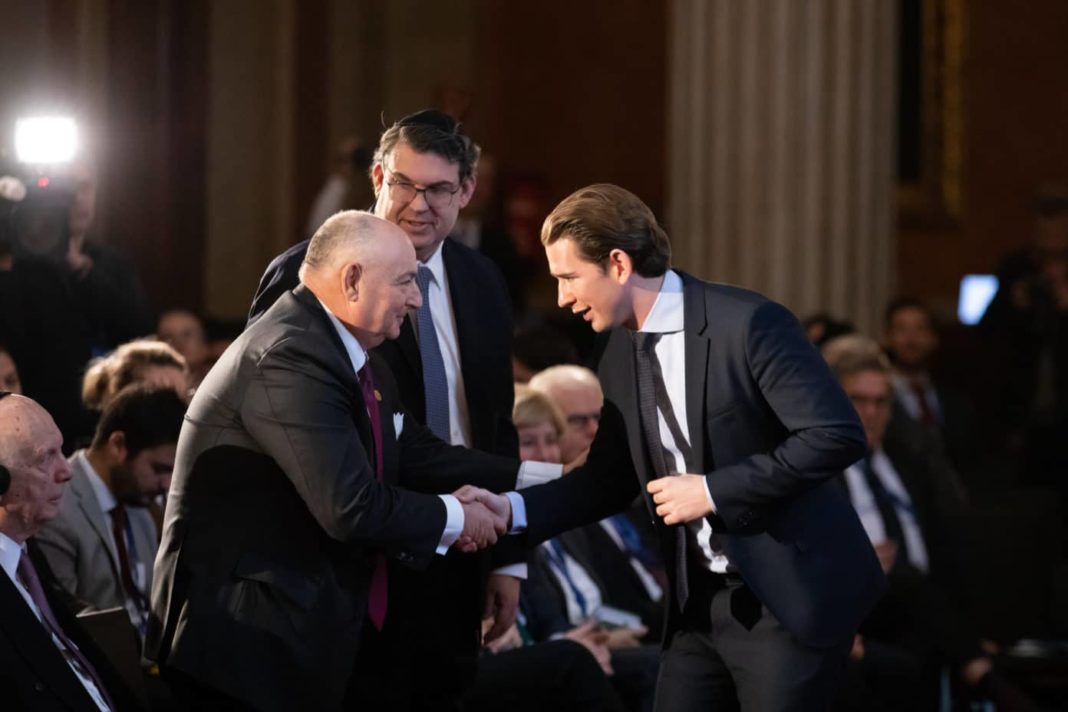 Facebook
Twitter
WhatsApp
Email
Print
VK
Viber
(Brussels, Thursday, November 15, 2018) – On November 20-21, European Jewish Congress President Dr. Moshe Kantor will be a keynote speaker at the ‘European Values, Rule of Law, and Security’ Conference, organised in the framework of the Austrian Presidency of the European Council, then co-host a high-level event with Austria’s Federal Chancellor Sebastian Kurz for Heads of State, EU leaders, Jewish leaders, ambassadors, parliamentarians and other distinguished guests, including Israel’s Prime Minister Binyamin Netanyahu.
Dr. Kantor will also have private meetings with President Alexander van der Bellen and Chancellor Kurz, before opening the conference “Europe beyond anti-Semitism and anti-Zionism – Securing Jewish life in Europe’ a high-level conference organised by the Austrian Federal Chancellery.
“These events are vitally important at a time when Austria holds the Presidency of the European Council, because talking about antisemitism is not enough,” said Dr. Kantor.  “We need, first of all, to recognize the full extent of the issue today and be determined to find pragmatic solutions to this problem.”
“The rise of antisemitism is one of the main security challenges of our time as radical forces, both on the right and on the left, are gaining strength.” Kantor added. “We have an obligation not to give antisemitism any space in the public sphere. We commend the Austrian Presidency for addressing these issues at the highest level as we seek a tangible commitment from all EU Member States to the security of the Jewish community, since the fight against antisemitism is an indicator of the ability of democratic states to protect their citizens in the face of such a security threat.”
At the event, a Catalogue of Policies to Combat Antisemitism will be presented to Chancellor Kurz, President Alexander van der Bellen and other senior leaders. The Catalogue, initiated and supported by the European Jewish Congress, is an intensive effort by senior experts and academics from the universities of Vienna, Tel Aviv and New York, to develop concrete policies to be undertaken by governments, public and private institutions, religious communities and those involved with combatting hate online.
The EJC Executive will also be holding its annual meeting in Vienna where Jewish leaders from across the continent will discuss challenges facing their communities, including antisemitism, security, the attacks on fundamental Jewish traditions like Brit Milah and Shechita and strengthening EU-Israel relations.