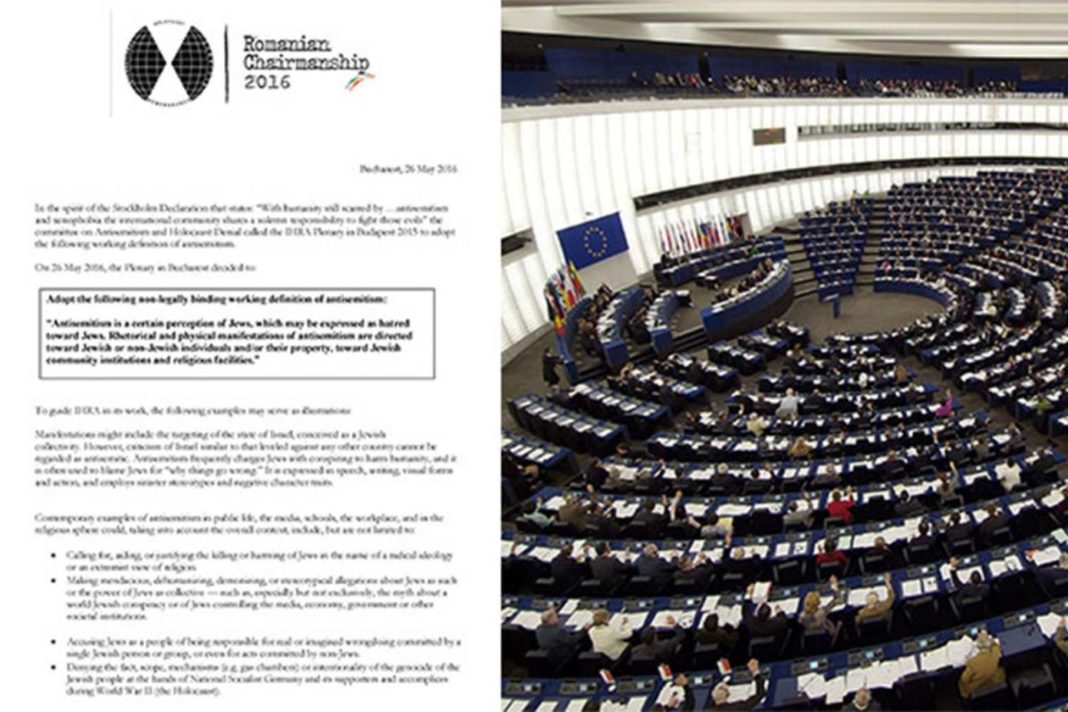 Facebook
Twitter
WhatsApp
Email
Print
VK
Viber
(Brussels, Thursday, 1st June, 2017) – The European Jewish Congress (EJC) applauds the European Parliament for passing a resolution endorsing the International Holocaust Remembrance Alliance (IHRA) working definition of antisemitism and calls on EU member states to adopt and apply the definition.
“This is a monumental day for the fight against hate and the protection of the rights of European Jews,” Dr. Moshe Kantor, President of the EJC, said. “For too long, Jews were deemed unique, with hate defined by the perpetrators and not by the victims.”
“The only people who will be dismayed by this decision are those who wish to continue the culture of antisemitic impunity and who believe that Jews should not be afforded protection under the law.”
In May 2016, the IHRA, an intergovernmental body comprising 31 countries, eleven observer nations and seven Permanent International Partners, adopted a definition of antisemitism in order to protect Jews from “rhetorical and physical manifestations of antisemitism directed toward Jewish or non-Jewish individuals and/or their property, toward Jewish community institutions and religious facilities.”
So far, only the UK, Austria and Romania have legally adopted this IHRA definition.
The European Parliament resolution on combatting antisemitism “calls on the Member States and European Union Institutions and Agencies to adopt and apply the International Holocaust Remembrance Alliance´s (IHRA) working definition of antisemitism in order to strengthen judicial and law enforcement authorities in their efforts to identify and prosecute antisemitic attacks more efficiently and effectively and encourages the Member States to follow the example of UK and Austria in that regard.”
“We are delighted that European institutions and nations are fully cognisant of the need to protect Jewish communities and we are grateful for their cooperation with the EJC to ensure that this is placed high on their agenda,” Dr. Kantor said. “The EJC continues to work with European nations and institutions at the forefront of the fight against hate, intolerance and antisemitism and we look forward to ensuring that this vital step is implemented across the continent.”