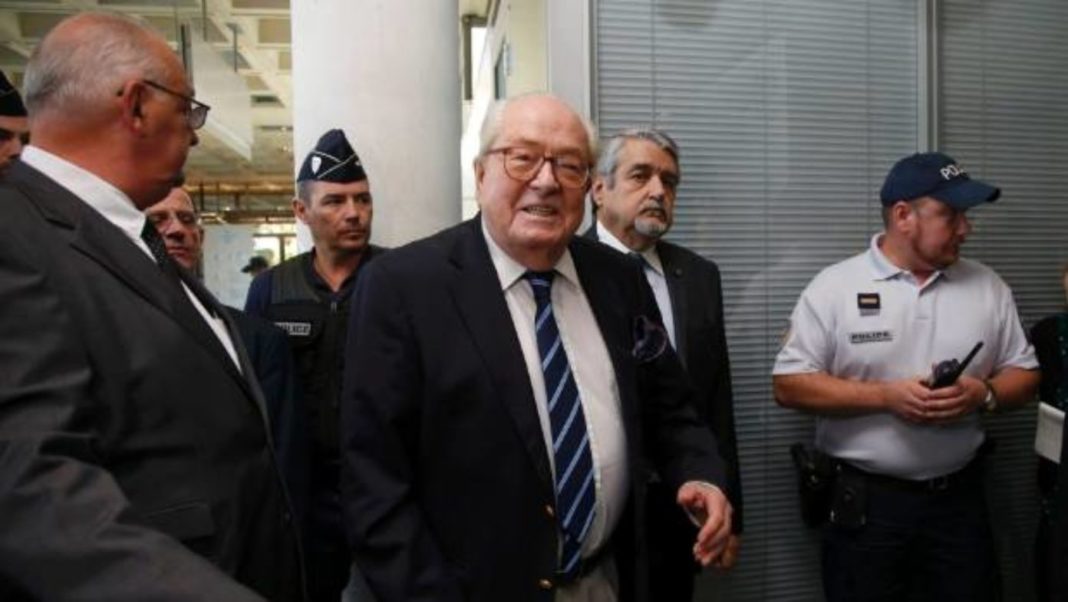 Facebook
Twitter
WhatsApp
Email
Print
VK
Viber
(Brussels, Thursday, July 20, 2017) – The European Jewish Congress (EJC) has called on the French Judiciary to use the full weight of the law and impose the strongest possible punishment on Jean-Marie Le Pen, the founder and former leader of the National Front, after it was decided earlier this month that he will face trial for inciting racial hatred for comments he made about a Jewish actor and singer in 2014. The EJC was a civil party to the lawsuit.
In a National Front video Le Pen said that “next time we will put him in an oven” when asked about Patrick Bruel’s criticisms of the party.
“Le Pen is an unrepentant anti-Semite and a very clear warning has to be sent to people like him that racism and bigotry will no longer be tolerated in France,” Dr. Moshe Kantor, President of the EJC, said. “We hope that if found guilty he will face the fullest punishment possible under French law.”
“We deeply appreciate President Emmanuel Macron’s strong words condemning antisemitism and we hope that this will be followed by action against people like Le Pen.” Kantor added.
Earlier in the week, President Macron spoke at an event in Paris to commemorate the 75th anniversary of the Vel D’Hiv round-up, in which 13,152 French Jews were deported to Nazi concentration camps by the then French government in July 1942. At the event President Macron admitted French official culpability for the round-up, condemned modern-day antisemitism and said this included anti-Israel sentiment.
Following President Macron’s comments, far-Left French leader Jean-Luc Melenchon, echoing comments made by National Front leaders, said that French were not responsible for the Vel D’Hiv round-up.
“Melenchon’s comments are sadly yet another indication that the dangers of antisemitism exist on both extremes of the spectrum,” Dr. Kantor said. “These extremes share little in common except for a hatred and suspicion of Jews and now, even Holocaust denial.”
“We are heartened by President Macron’s comments but dismayed that antisemitism and Holocaust denial are still prominent in modern day France.”
The European Jewish Congress is the representative organization of European Jewry.