Barcelona terror attack (at least 13 dead):’This evening we again saw that terror strikes everywhere, the civilized world must fight it together in order to defeat,’ says Israeli PM Netanyahu 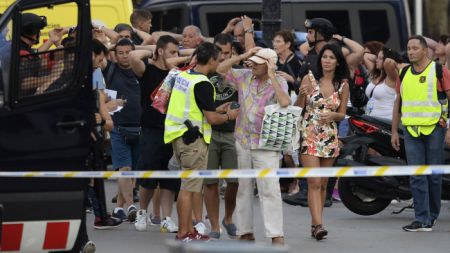 ‘’This evening we again saw that terror strikes everywhere,  the civilized world must fight it together in order to defeat,’’ said Israeli Prime Minister Benjamin Netanyahu in a first statement on the terror attack in the Spanish city which claimed the lives of at least 13 people and injured dozens.

A van drove into pedestrians in the crowded Las Ramblas district. The circumstances of the events are still unfolding and the Spanish authorities are investigating the incident as a terrorist attack.

Islamic State claimed responsibility for the attack, the group’s Amaq news agency said.Police confirmed they had arrested two people in connection with the attack. It was not immediately clear how many attackers were involved in the incident.

The terrorist attack occurred in the vicinity of the Maccabi kosher restaurant, located across from the city’s medieval Jewish quarter.

The Chief Rabbi of Barcelona, Meir Bar-Hen,  told Israel’s Channel 2 that all community events will be cancelled and the he is headed to the scene of the incident to offer his services.

A Chabad representative in Barcelona told The Jerusalem Post that the institute is located close to the scene of the attack and that members of Chabad staff were trying to reach the area to see if they were any Jewish casualties but that the police would not let them enter the area. “If there are Jews there we will try to find them and help them however we can,” he said. “We are waiting for the incident to be over.”

He confirmed that all Jewish institutes had closed until they received further notice.

World Jewish Congress President Ronald S. Lauder condemned the attack. “The World Jewish Congress harshly condemns this heinous act of violence and carnage, and is carefully monitoring this situation with concern. Our thoughts and prayers are with the victims of this attack and their families, and with all the people of Barcelona.

“We are monitoring the events as they unfold with care and concern, and are in touch with the local Jewish community and its security groups. We pray that there will be no more victims.”

Moshe Kantor, President of the European Jewish Congress (EJC), said. “They are choosing to strike again at our zest for life and our basic freedoms with their cult of death. It is becoming increasingly difficult to prevent this abuse of regular vehicles as their chosen instrument of murder.”

“We stand with the Spanish people and urge the authorities to bring to justice those who perpetrated this savage attack, including those who inspired it and those whose incitement encouraged it.”

The President of the European Parliament, Antonio Tajani, declared: “I want to condemn, in the most resounding terms, the terrorist attack perpetrated in Barcelona earlier today. My thoughts are with the victims of this terrible atrocity and their families, as well as the citizens of Barcelona. Tonight, Barcelona is close to the heart of all Europeans.

He added: “The determination of  the European Union in the fight against terrorism will not diminish. We will not be intimidated by those who peddle violence and death and we will face them down strengthened by our freedom, our unity and rule of law.”

European Commission President Jean-Claude Juncker said the Commission ‘’is at the full disposal of the authorities for any help or assistance necessary. This cowardly attack has deliberately targeted those enjoying life and sharing time with family and friends. We will never be cowed by such barbarism.”