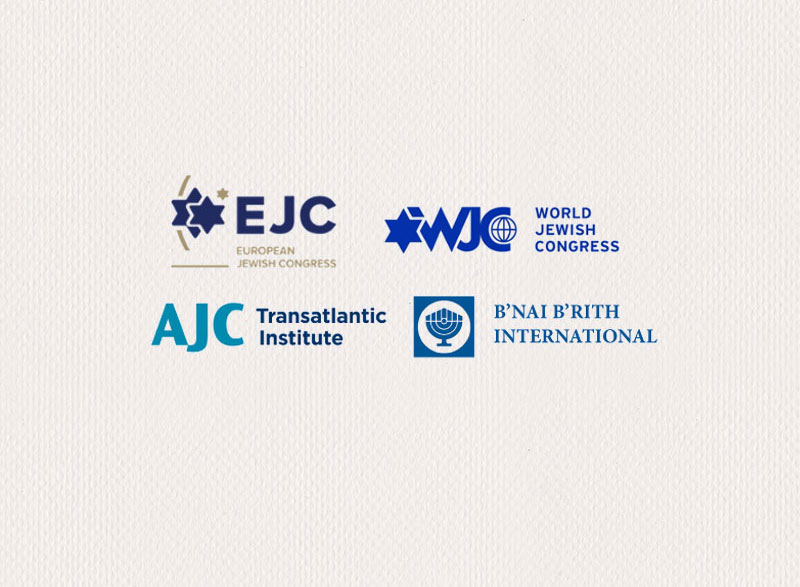 (Brussels, Monday, 18 February 2019) – The European Jewish Congress (EJC), along with its partners in the World Jewish Congress, the American Jewish Committee’s Transatlantic Institute and B’nai B’rith International, have presented a first ever action plan to combat antisemitism to the Council of the European Union and the EU’s Coordinator on combating antisemitism Katharina von Schnurbein.

The document is an unprecedented action plan with concrete proposals for the European Union and Members States to fight antisemitism, following the Council Declaration of 6 December 2018 on the fight against antisemitism and the development of a common security approach to better protect Jewish communities and institutions in Europe.

Among other recommendations, the Action Plan calls on all EU Member States to adopt in full the IHRA Working Definition on Antisemitism and proposes crucial steps, such as closer cooperation with communities on security, improving data collection on hate crimes and creating common guidelines for countering antisemitism in education that will provide long-term positive effects for Jewish communities in Europe.

“This is an excellent and detailed document which we hope the EU Council will adopt in order to make our communities safer and more secure,” Dr. Moshe Kantor, President of the EJC, said. “This is what we, European Jewry, require to reverse the disturbing trend of rapidly and horrifyingly increasing antisemitism across our continent.”

“As sought by the EU, this document is our answer to hate and intolerance against Jews. If there is to be an end to the current deluge of antisemitism then it requires a holistic, strategic and forward-looking response.”

The Action Plan also requests from the EU to address antisemitism within its Human Rights Dialogues with third countries, counter bias that might fuel antisemitic stereotypes and condemn antisemitic discrimination of Israel or Israelis through their exclusion in culture, sport, academics and art.

The document has been welcomed by Ms Katharina von Schnurbein and it follows the announcement by European Commissioner Věra Jourová to establish a high-level Working Group on the implementation of the Council declaration.

“As with all other minorities, the Jewish community should have the right to define hatred against it and assist in addressing ways to end discrimination at all levels and in all manner of new and manifold methods,” Dr. Kantor continued. “If our leaders are serious about combating antisemitism then we cannot allow any gaps or loopholes for discrimination and exclusion, and the battle against hate and intolerance needs to take place in the political, educational, legal, law enforcement, judicial and diplomatic arenas.”

Full text of the action plan for combatting antisemitism in Europe:

b. Member States should adopt specific strategies to combat antisemitism or outline concrete and precise objectives and steps on combating antisemitism as part of their national action plans against racism. Such strategies should include a solid definition with a broad understanding of antisemitism, rely on data collection to support evaluation of plans, receive sufficient political support at national and local levels and be elaborated in cooperation with local Jewish communities and organisations.

c. On the EU level, the office of the EC Coordinator on combating antisemitism needs to be significantly upgraded and equipped with sufficient qualified personnel and a budget, reflecting the challenging coordinating role that the EU has taken on in support of member states’ efforts to implement the EU Council Declaration on the fight against antisemitism (6 December 2018). Proper implementation and change of national policies will be needed to ensure a decline of antisemitic expressions and prejudices. In order to facilitate even better coordination amongst the Member States, the EU ought to consider creating in the future an EU Council Coordinator on Combating Anti-Semitism, modelled after the mandate of the EU Counter-Terrorism Coordinator.

d. Several EU Member States have already appointed national coordinators, some (like Germany and France) have equipped the offices with significant personnel. Other Member States should follow their example and appoint contact points for the Jewish community at national level to ensure the horizontal implementation of policies (education, security, data collection, training etc.)

A progress report on the transposition and implementation of the provisions of the Framework decision in all 28 Member States needs to be published. The EU and its agencies should also better assist Member States in providing hate crime training to law enforcement, including through CEPOL and collect disaggregated data on type of crimes and ethnicity/religion of victims. Additionally data should be shared between government and civil society organisations. The annual FRA report on antisemitic hate crime and incidents should monitor the use of the IHRA definition by civil society organisations collecting data on antisemitism.

The European Union should address antisemitism within its Human Rights Dialogues with third countries. Regular and timely reporting and monitoring of antisemitism in third countries, especially where Jewish communities are under threat, will help to increase awareness internally and underline the EU’s standing on ‘exporting’ Human Rights. Strengthening the collaboration with Israel and the US in countering antisemitism worldwide and condemning systematically antisemitic remarks publically at international fora such as the UN.

Although the European Union already invests funding into countering antisemitism, it often trickles away in general counter racism measures disregarding the specific character of antisemitism. A dedicated budget line should address antisemitism specifically. Antisemitism should also be addressed in other funding streams such as Erasmus + and Europe for citizens. Combatting antisemitism should be recognised as a specific funding reason and allow organisations working on this field to access funds.

The EU and Member States should ensure that Holocaust education and remembrance is properly addressed in the next MFF and that support for projects currently funded through the remembrance strand of the Europe for Citizens Programme is increased. Additionally, every threat to the remembrance of the Holocaust, such as Holocaust denial and distortion, should be rigorously called out and academic research be encouraged. Implementation of the Framework Decision on combating racism and xenophobia should be strictly monitored in this particular aspect.

The lack of comparable data on antisemitism and antisemitic attitudes among the general public remains a challenge across the EU and hampers targeted counter-measures. Research on antisemitism has largely been restricted to historical and theoretical aspects. Strengthening the response must include investment in research on contemporary antisemitism including the victims’ perspective. The European Commission should commission a dedicated study on the diffusion of antisemitism among the general population in the EU, both across society as a whole, and in key subgroups within the population, notably the far-left, the far-right, Christians and Muslims.

b. Non-formal educational organisations, such as voluntary activities, should be better supported and the collaboration with Israeli institutions expanded.

d. Member States should promote the teaching of the Holocaust (the Shoah) in schools and ensure that teachers are adequately trained for this task.

e. Member States should take an active role in communicating to newcomers in schools and integration courses that Jewish life is an integral part of Europe, as well as the role of Jewish culture in European history.

9. Relations with the State of Israel

a. Countering anti-Israel bias that might fuel antisemitic stereotypes

The recently published Eurobarometer showed that Jews in Europe are seen significantly through the lens of the Middle East conflict. Even if not intentional, stereotypical views on the complex situation in the Middle East can thus contribute to negative, sometimes even antisemitic, prejudices against Jews in Europe. Thus it is necessary to educate and train politicians, media teachers, religious leaders about the thin line between antisemitism and criticism of Israel with the aim of ensuring that Jews in Europe are not held accountable for events in the Middle East while respecting the religious, cultural, geopolitical and historical importance of Israel for Jewish communities in Europe.

Israelis are regularly faced internationally with exclusion in culture, sport, academics and art. The European Union, as a close partner with the state of Israel, should call out and respond to these attacks by declaring solidarity with Israel/Israelis using the IHRA definition and make a clear stance against antisemitism and antizionism as an underlying condition for all relations with third countries.

Strengthen people-to-people contact between Europeans and Israelis to counter prejudice and stereotypes. Expand Erasmus+ exchanges with Israeli education facilities, include Israel in more EU programmes and create a specific Coordination Center for EU-Israeli Youth Exchange as umbrella for all youth-related cooperation.

The 2018 survey on the experience and perception of antisemitism among European Jews is an excellent and crucial tool for policy development. It should be carried out in regular intervals of five years.

To give this approach the necessary support, it may be advisable if FRA followed the example of the EU institutions that have adopted the IHRA definition and also placed it back on its website.