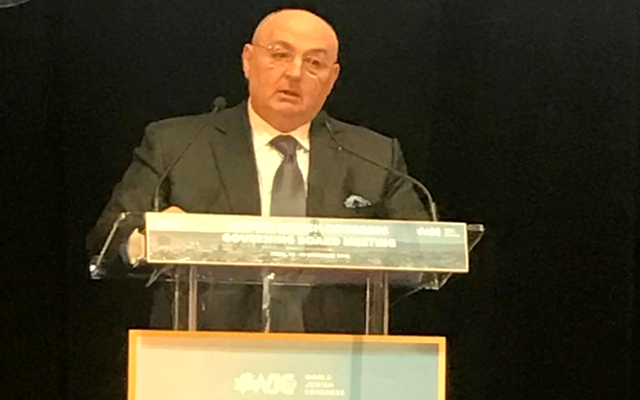 Dr Moshe Kantor addressed the Governing Board Meeting of the World Jewish Congress (WJC), in his capacity as EJC President and Chairman of the WJC Policy Council.

The meeting was held in Paris on 18-19 November 2018 at the headquarters of the United Nations Educational, Scientific and Cultural Organisation (UNESCO).

Dr Kantor spoke of the current political challenges facing Europe today, and their effects on the Jewish street: “Europe is facing existential problems, such as radicalism, populism, a weak political centre, economic imbalances and terrorism. Historical memory is no longer vivid, and Holocaust survivors will unfortunately leave us soon. Antisemitism is no longer considered an absolute evil in our democratic societies.”

“These problems are very likely to get worse”, he added. “Soon, Europe will face a decisive moment when it will have to redefine its values. Unrestricted one-way tolerance is no longer the key to political stability and social well-being. This concept, inherited after the Second World War is no longer fit for purpose. Tolerance requires a tolerable degree of security.”

“The greatest test for our societies will be how we deal with the intolerant, and I believe that the paradigm of secure tolerance can play a vital role in guaranteeing our freedom and our peaceful coexistence.”

Addressing the recent tragic shooting at the Tree of life synagogue, Dr Kantor said: “European normality has also sadly arrived in America Pittsburgh opens a new chapter in American Jewish history. After Pittsburgh, Jewish communities no longer take their security for granted; Instead, it becomes a permanent factor in the equation of Jewish life.”

Finally, Dr Kantor set out a plan of action to overcome these challenges: “In the short term, the security of Jewish individuals and institutions is priority number one. This requires an irrevocable and tangible commitment to increasing financial support and operational capabilities.”

In the long term, however, a new thinking is required, and secure tolerance is a viable solution.”

The WJC Governing Board comprises nearly 150 presidents of Jewish communities worldwide. They were joined by senior representatives of the international community and Israeli organizations, including Jewish Agency Chairman Isaac Herzog and UNESCO Director-General Audrey Azoulay.

Antisemitic chants at anti-racist march in Paris shows how worthy cause being hijacked to spread hate, says EJC President Kantor

In meeting with Pope Francis at the Vatican Dr. Moshe Kantor discussed next World Holocaust Forums to focus on ethical and moral issues

World Holocaust Forum President Dr. Moshe Kantor tells assembled world leaders that with current levels of emigration there could be no Jewish communities in...