Opening Speech by President of the European Jewish Congress Viatcheslav Moshe Kantor at the Fourth International “Let My People Live!” Forum, a Commemorative Event to mark the 70th Anniversary since liberation of the Nazi concentration camp Auschwitz (Oswiecim). Prague 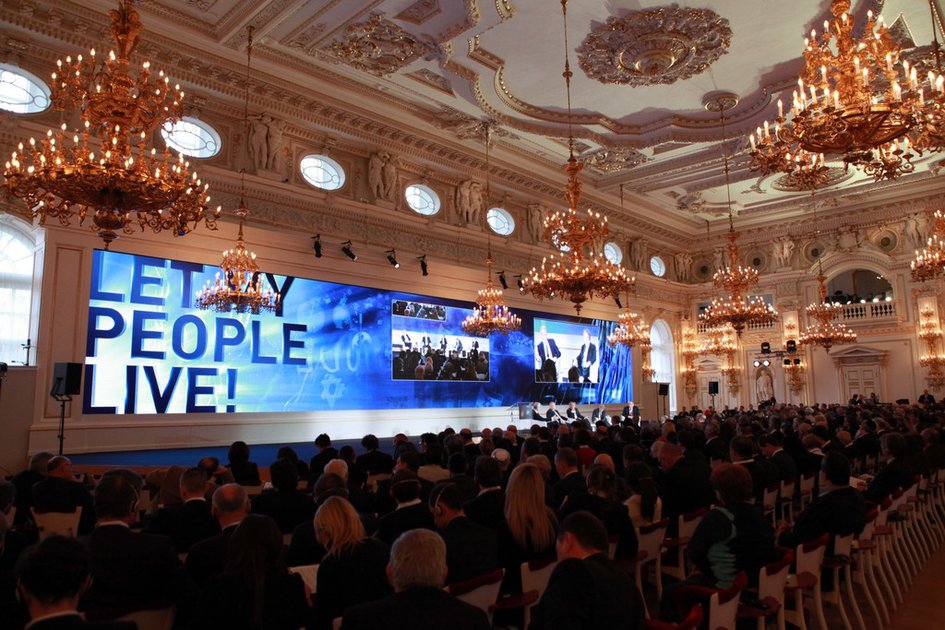 Honourable participants of this assembly,
Ladies and Gentlemen,

On behalf of the European Jewish Congress, I wish to express our deepest gratitude to President Zeman for hosting the Forth International “Let My People Live!” Forum the day before the International Holocaust Remembrance Day – 70th anniversary.

My sincere gratitude also to Prime Minister Sobotka and the Czech government and to President of the Parliament Hamaček, for their tremendous assistance in organising this event.

Let me start with a joke. During a heavy storm, one Jew remained very calm in a vessel. Everyone but him was nervous, rushing back and forth. A friend asked him, “Moshe, why are you not worried?” And Moshe replied, “Because this is not my boat.”

I would like to say to you today, “We all are in the same European boat!” And it is getting through the growing waves of radical Islam, neo‑Nazism and anti-Semitism. Today we are witnessing the renaissance of Nazism, which we call neo‑Nazism and ultra‑right. It is flourishing not only on the streets. Neo‑Nazis have already entered national parliaments, European Parliament and local governments. Soon they could lead national executive power. Do you think their behaviour will be much different from their brown predecessors?

Who thought seriously that Herr Schicklgruber, a modest artist from Linz in Austria, would become the emperor of Europe in the middle of the last century? And respected world leaders were happy to appease him in every possible way.

Please, no political correctness today. We have many journalists with us here, and one would say that we need to be very careful and politically correct, and send simple messages. I think that today we need to speak in a very clear manner and discuss deep issues without thinking about political correctness and how it would sound. We see the same things on the horizon again. I am absolutely sure that tomorrow, when ultra-right and neo-Nazis lead governments, they will immediately force us to forget about tolerance and political correctness, just the day after tomorrow.

Now, about radical Islam or jihadism. Neither Islam as a religion nor the global Muslim community, the Ummah, can be held responsible. Ninety‑nine per cent of Muslims are normal law‑abiding people who never think of persecutions, pogroms or murders. Islam is their common denominator. It is more than a religion; it is a crucial factor of identity for more than a billion and a half people. Our Muslim neighbours have come to Europe to stay forever. Only our common enemies, neo‑Nazis, can talk about finding a solution to make them leave Europe.

Radical Islam is the force to blame. The features of this phenomenon are well known. Arrogance, unshakable belief in your own righteousness, contempt for other faiths, creeds, and ideals.

Total rejection of such notions as freedom of thought and speech. Narrow and rigid fundamentalism, precluding any free discussion. And intolerance. Absolute lack of appreciation of the value of human life.

The background of Nazism is quite different. But if we try to feel the atmosphere, the spirit, if we compare the general approach to human values, we will be struck by a horrible similarity.

Yes, in certain vital aspects jihadism is very close to Nazism. One could even say that they are two facets of the same evil.

Let us remember that Osama bin Laden created not only the infamous Al‑Qaeda but also the World Islamic Front for the Jihad against Jews and Christians. And if we analyse the content of bin Laden’s appeals, declarations and manifests, it is quite easy to see the same intolerance, the same contempt for freedom and human rights. Are these intolerance and ruthlessness directed against Jews only? By no means.

If history is to teach us anything, it is this sad axiom: those who start with hunting down and killing Jews, invariably continue with discriminating, suppressing, and finally murdering everybody who disagrees with tyranny, suffocation of freedom, oppression, and humiliation.

About anti-Semitism itself. One of the dear fairy tales constantly repeated by anti‑Semites is that Jews are too rich and too influential.

Almost 75 years ago, Simon Dubnow, an outstanding historian who died in the Riga Ghetto, pronounced a powerful formula, “Those who hate Jews, always love their money.” For me as a businessman, it is a very clear issue. We believe in creating jobs, paying taxes, making investments. Everything that makes economy flourish.

But look at the chart behind me. We have compared the growth ratio of the European economics and the level of anti-Semitism. The correlation is obvious. Only three times in history, GDP went below 1% a year: before World War I, before World War II and just now. Economic recession leads to the increase in harassment of Jews. The logic is trivial. Funds and assets are needed. And today these curves go apart again. A threatful warning!

And another fact. Current relative scale of Jewish emigration (yellow curve) from Europe is close to the level of mid‑1930s! Current exodus of Jews is caused by two reasons: economic pressure (like in Hungary and Greece) and threats from radical Islam.

Of course, by confiscating money and businesses and by expelling Jews, one can have a short‑term boost for any type of expansion, including the military one, as it was in Germany; but it destroys the integrity of economics built over centuries and based on a very high level and reliability of human capital, because nobody can find more law‑abiding people than Jews living in Europe for three thousand years. The law of the country is our law.

Today, Jews are the only European minority, which is afraid of sending kids to school. Interesting fact. The thickness of the iron door at the preparatory school of my kids is 25 cm. Not every mother can open such a door without someone’s help.

In response to my complaint, Federica Mogherini said, “Europe, where parents are afraid to send their kids to school, is not Europe any longer.”

But not everybody has such deep understanding.

Nothing can compensate for the lack of foresight demonstrated by democratic leaders. And what are many of them to blame for today? Short‑sightedness, certainly. But not only that. The fear of being called an enemy of freedom, tolerance, political correctness and human rights. For some people, it is easier to turn a blind eye to violence and barbarity than to risk being accused of opposing multiculturalism.

May be because of that we are a bit late.

I have felt the smell of violence in the air of European cities. I have heard slogans “Hitler was right” and “Jews go to ghetto!” I have read on the walls, “Close Guantanamo, reopen Auschwitz!”

But Europeans remained in comfort arrogance. And terrible tragedy happened in Paris. My heart is of course with those people who were marching against terrorism and violence. But my mind understands that solidarity alone is not enough. We need a strong action plan.

That is why we invited journalists here, lawyers and of course our respected guests, legislators. We believe in these powerful strata of civil society. We believe that responsibility, democracy and law can prevent the unthinkable.

I very much appreciate your coming here and willingness to discuss the issues in a concentrated manner and without political bias.

Tragedies in Paris, Brussels and Toulouse are visible implications of the deep structural problems embodied in the European society:

• Radical Islam imported into our democracies and spewing forth into violence and murder
• Multiculturalism is tragically giving birth to mono‑cultural ghettoes
• An era of mass and instant communications and of mass migrations and changing populations with very little or even no control
• And finally media conditioned by sensation and instant profit rather than social responsibility.

I claim that Europe is at the edge of “new Middle Ages.” Today totalitarian doctrine is openly destroying the continent’s Judeo‑Christian values as it did 70 years ago.

That is why we have prepared detailed and practical Azimuth Map, Model Law and Declaration, which speakers of parliament are proposed to sign. These three documents were elaborated by top experts and complement each other to counteract the threats of radical Islam, neo‑Nazism and anti-Semitism in Europe. Please, support our mutual initiative by real, honest and concentrated discourse.

Speech by the President of the European Commission Ursula von der Leyen at the International Holocaust Remembrance Day event. January 26, 2022

Distinguished guests, Members of the Jewish community, Earlier this month I joined President Macron in the Pantheon in Paris to honour two founding figures of the...
Read more
Speeches

Speech by the President of France Emmanuel Macron at the International Holocaust Remembrance Day event. January 26, 2022

Good day to you all, I would like to thank you for the invitation to open this event organized by the Congress of European Jews. On...
Read more
Documents

Speech by EJC President at the Presentation of Book Series “An And to Antisemitism!” Vienna, Austria

Dear President Sobotka, Distinguished guests Dear friends, We are gathered here today, on the anniversary of Kristallnacht, the day that symbolised the beginning of the darkest period...
Read more