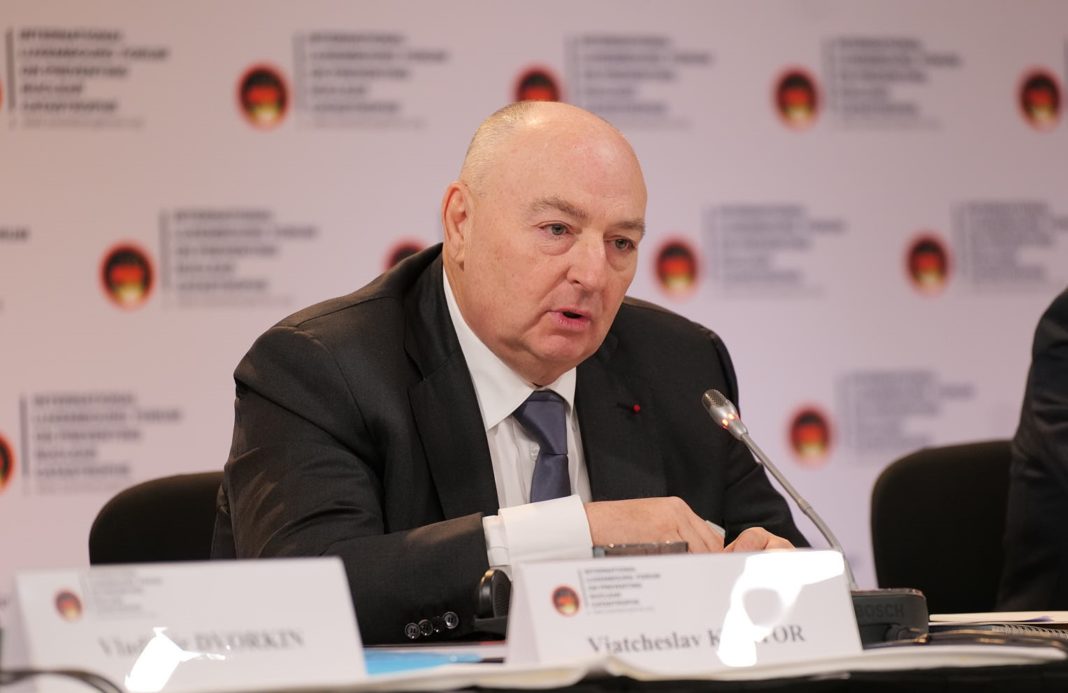 I would like to thank you, the members of the Supervisory Board, and all the attendees of our conference. This is the thirteenth meeting of the Board, which is traditionally held at the end of each year to sum up the results of the Luxembourg Forum’s work and its further plans.

My special thanks go to our all-time participant Bill Perry, whose contribution to our cause through his books, videos and talks cannot be overestimated.

Results of the Forum’s Organizational Efforts

It was attended by the heads of major international organizations directly involved in arms control and non-proliferation, including the Nuclear Threat Initiative, the Pugwash Conferences on Science and World Affairs, Global Zero, the Russian International Affairs Council, and the James Martin Center for Nonproliferation Studies.

As usual, the final declaration was presented to the UN Security Council, major heads of state and key international organizations.

At the same time, the Vatican Secretary of State, His Eminence Cardinal Pietro Parolin, invited the Luxembourg Forum participants to the Vatican, where they had a meaningful discussion on nuclear arms reduction.

At the request of Cardinal Parolin, we presented proposals how to specify statements formulated by Pope Francis during His Holiness’ visit to Hiroshima and Nagasaki.

This year, we established a Youth Section of the Luxembourg Forum in response to the idea voiced at the previous conference of engaging younger members. We brought in worthy experts recommended by the Supervisory Board. Some of them are here today. We hope that this will help them develop their creativity and offer extraordinary solutions to our common problems.

During the year, based on the results of the Rome conference, we published a book called Arms Control: Burden of Change, presented here.

The Forum’s experts posted over 80 articles in academic journals and media outlets on the current crisis of strategic stability and treaty relations in the sphere of nuclear arms.

Our leading researchers attended and spoke at more than ten international conferences on field-specific issues.

You all are perfectly aware of the crisis in this area: the demise of the indefinite-term INF Treaty, the uncertainty of the New START renewal, the United States’ exit from the Iran deal and sanctions against those who are still cooperating with Iran under the deal, the lack of resolutions on the denuclearization of North Korea, President Trump’s intention to withdraw from the Open Skies Treaty, and the lack of any dialogue or negotiations on these key issues are of our great concern.

The increasing uncertainty in all these areas reminds me of the second law of thermodynamics, which states that without corrective action, the entropy in a system always increases; or, in layman’s terms, in any system left by itself, order decreases and disorder increases.

In all our declarations, we always try to initiate the actions required to decrease entropy.

The Rome declaration says that the degradation of strategic stability in combination with the demise of key arms control treaties is happening simultaneously with building crises and wars across the globe, which may result in out-of-control escalation; that today, the threat of nuclear catastrophe is higher than it ever was during the Cold War. The threat is not so much that nuclear will be used deliberately, but that a war may be started because of a human mistake, system error, misunderstanding or miscalculation. These risks are heightened with new cyber technologies.

We were the first to propose a moratorium on launches of medium-range and small-range missiles, which are prohibited by the INF Treaty, in Europe and in the East. The United States rejected this proposal. So far, our proposals on the New START renewal and negotiations on a new treaty covering traditional and new strategic arms systems have not been implemented.

Other new types of weapons mentioned by the Russian President last year – the Zircon anti-ship hypersonic cruise missile and the Kinzhal air-launched ballistic missile– are not classified as strategic arms. Kinzhal can be classified as strategic only if it is carried by a long-range bomber; however, no such plans have been announced. In addition, according to the estimates of NTI experts, these new missiles, along with the Burevestnik nuclear-powered, nuclear-armed cruise missile and the Poseidon nuclear-powered, nuclear-armed unmanned underwater vehicle, can be deployed after the expiration of the New START.

I assume Des Browne, who is on the NTI Board, can confirm these findings.

As for the Trump administration’s demands to include China in the negotiation process, we can only recommend that the US and Russia reach a bilateral agreement, and only after that offer China any acceptable avenues of cooperation in nuclear arms control, taking into consideration its utmost reticence in this area.

We should keep insisting on renewal of the New START and negotiations on a new treaty and call on the United States and Russia to impose a moratorium at the national level on the deployment of medium-range missiles.

If there are no positive developments in these areas, we should develop proposals and measures in advance, which in future will be able to restrain entropy and preserve several principals of strategic stability, at least to a minimal extent. For instance, if the New START terminates in 2021, we should recommend that the United States and Russia keep several provisions on transparency from that Treaty, notify the parties about launches of ICBMs and spacecraft carriers and about strategical military exercises and other steps in this area, not implement any measures to camouflage strategic weapons to hide them from national space intelligence systems, and other similar measures.

The Luxembourg Forum’s experts are working on this issue with other professionals. I believe that we should analyze ways to mitigate the destabilizing effect of cyber threats.

That is all I wanted to say right now. I have not touched on the measures to ensure a positive outcome of next year’s NTP Review Conference. I assume this will be discussed at the conference.

Finally, I am glad to have the opportunity to congratulate Supervisory Board member William Potter on his election as an honorary member of the Russian Academy of Sciences. The Academy has almost a 300-year history and remains one of the world’s most respected scientific organizations.

Thank you for your attention and patience. I remain confident that our work will be successful.

Statement by the President of the Luxembourg Forum on July 15, 2020, at a special conference session on the “Intellectual Legacy of the Academician Sakharov and Issues of Strategic Stability”

0
Ladies and gentlemen, distinguished colleagues, Good morning, good afternoon and good evening!  In accordance with the Forum’s plans, even before the pandemic struck we intended to...
Read more
Documents

The Kantor Center Annual Report on Antisemitism Worldwide in 2019

0
Avner Shalev, Chairman of the Yad Vashem Directorate. Shalom, good morning, and welcome everyone! First of all, as it was mentioned, I’m Avner Shalev,...
Read more
Documents

THE BOOK WRITTEN BY EXPERTS OF THE INTERNATIONAL LUXEMBOURG FORUM AND NTI “PREVENTING THE CRISIS OF THE NUCLEAR ARMS CONTROL AND CATASTROPHIC TERRORISM”. WASHINGTON, 2015

PRESENTATION OF THE JOINT PUBLICATION BY THE INTERNATIONAL LUXEMBOURG FORUM ON PREVENTING NUCLEAR CATASTROPHE AND THE US-BASED NUCLEAR THREAT INITIATIVE (NTI), ENTITLED ‘PREVENTING THE CRISIS OF THE NUCLEAR ARMS CONTROL AND CATASTROPHIC TERRORISM’. WASHINGTON

0
Overview – The report on Antisemitism during 2015 The Kantor Center, Tel Aviv University   Executive Summary: The feeling with which the year 2015 ended was one of...
Read more
Documents