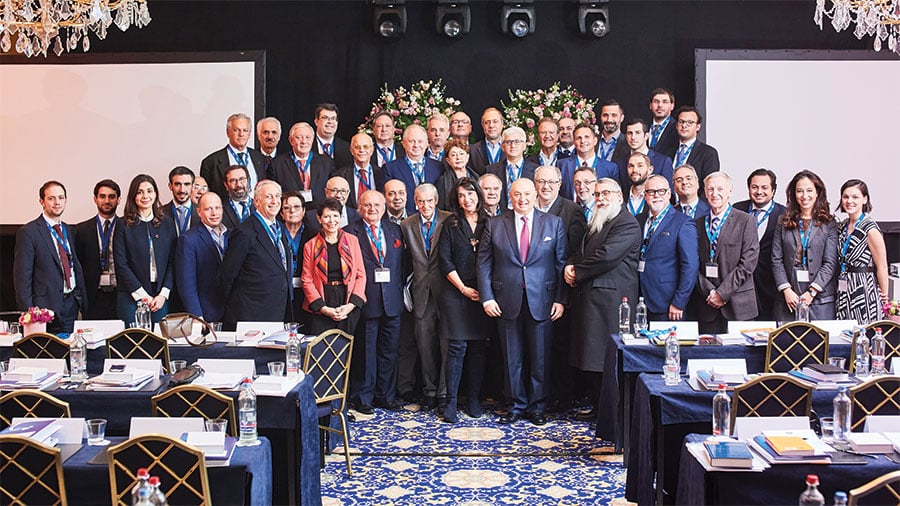 The EJC is today the regional affiliate of the WJC. As the sole political representative organisation of European Jewry, the EJC protects the interests of its affiliated communities, working daily with European Union institutions and officials, the Council of Europe (where the EJC has participatory status) and national governments and parliaments.

The EJC acts as an intimate forum between communities, where ideas can be exchanged easily, and internal elections and referenda decide future leadership, projects and goals. Since its establishment, the EJC has developed and expanded in order to meet the constantly changing and enlarging European Union (EU).

Today, the wide political and geographical representation of the EJC matches that of the Council of Europe. Based in Brussels, the EJC federates and co-ordinates 42 national Jewish communities in Europe, encompassing approximately 2.5 million Jews.

The EJC addresses the many challenges contemporarily faced by European Jewry. The EJC’s agenda has evolved since its establishment to address the enormous diversity of Jewish communities within Europe. However, in spite of their cultural differences and dissimilar historic backgrounds, EJC’s members all share common needs and interests, which in turn become the EJC’s primary objectives:

Fostering  Jewish Unity. To foster the unity of the Jewish people, to strive for the fulfillment of its aspirations and ensure the continuity and development of its religious, spiritual, cultural and social heritage.

Connecting Jewish Communities. To create opportunities for community leaders to establish ties with one another and share their experiences and ideas.

Helping the communities flourish. To assist in the revitalization of the once rich Jewish life in parts of Europe and to help small communities to develop and flourish.

Combatting antisemitism. To combat the resurgence of antisemitism and xenophobia through education, justice and security, in cooperation with national governments and European institutions.

Protecting Jewish life. To protect Jewish lives and to defend the individual rights of Jews to practice Judaism and its traditions freely and to monitor and combat all hostile legislative initiatives in this respect.

Preserving the Shoah memory. To ensure the memory and education of the Shoah and to fight against those who distort or deny its memory by organizing commemoration events, visits to the concentration and death camps, and promoting educational programmes.

Promoting balanced decision-making. To promote a balanced European policy towards Israel, to defend its image, which is continuously vilified by dangerous propaganda, and to assist in the construction of a healthy dialogue between Europeans and Israelis.

Monitoring legislation. To monitor developments in the legislative field that can threaten Jewish life and traditions on European and national levels and to take immediate action to protect Jewish interests.

The Security and Crisis Centre by the EJC (SACC by EJC) is based in Brussels, Belgium. A highly qualified team of crisis management experts is available to help your community prepare for the worst.

During a real crisis, the SACC by EJC team provides assistance and support. The safety of Jewish communities in Europe is its primary concern. The SACC Control Room is equipped with all necessary means and amenities for supporting a large-scale community crisis event. SACC organises training seminars and conferences at our office in Brussels and across Europe.

The SACC trains and prepares Jewish communities to handle crisis and security management by coordinating all the various arms of the community – leadership, security, medical and psychological in crisis management teams.

The SACC’s aim is to help improve the connection between the communities across Europe and within the countries in order to enable maximum cooperation during a crisis.

SACC’s expertly trained Crisis Managers have many years of experience in the fields of security and crisis management and are fully equipped to help your community overcome any situation.

The SACC helps Jewish communities establish a crisis management team, support in training of team members, as well as regular follow-ups to make sure that your community is prepared to handle any situation – whether it is a terror attack, natural disaster, or any other crisis. Its regional Crisis Managers are available 24/7 through a quick-reaction communication system run and maintained by SACC by EJC which allows them to act according to the circumstances.

The SACC’s goal is to ensure the safety and preparedness of Jewish communities across Europe.

The President of SACC is EJC President Moshe Kantor.

“This is a watershed moment for the cooperation and synergy between security officials in European Jewish communities and local law enforcement agencies,” Dr. Moshe Kantor, President of the EJC said at the opening of the Centre. “At a time of heightened security risks not only for our communities but for all European citizens, it is vital that we share information and best practices with each other and maintain a very high coordinated level of alertness to the growing risks. This center is also ready to share its best practices with any minority or group which feels threatened”.

“We are also working in concert with European authorities, and we would like to send the message that together with European governments, everything possible is being done not only to preserve individual freedoms but also the right of Jews to live in a secure environment.” Dr. Kantor added.

Vienna, Austria
0
(Vienna,  Wednesday, 21st November 2018) – The most comprehensive and detailed proposals and recommendations, including legislative, to combat antisemitism was presented in Vienna today to...
Read more
Load more